The Early Childhood Initiative was a large-scale attempt to provide comprehensive educational and social help to young children in the Pittsburgh region’s poorest neighborhoods. Children’s Hospital and the University of Pittsburgh assembled a research team to perform a rigorous ongoing assessment of ECI.

After three years of observation and analysis, the team had prepared a voluminous report, and they needed an executive summary that not only summarized the research findings but put them in context. We produced a publication that explained the achievements of the ECI project and their impact on the children and their communities. Thousands of copies of the executive summary have been distributed. 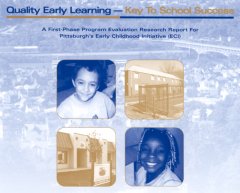