Chatham College wanted to increase contributions from its alumnae around the world. Recent research has shown that patterns of giving are different for women and men — for Chatham’s “Alumnae Recorder” magazine, we created an entire special issue titled “Women and Philanthropy.”

The stories reported new trends in giving, explored the special motivations behind women’s giving, presented the viewpoints of national experts, and featured interviews with key alumnae who had contributed in different ways to their alma mater.

The College told us that it received more reprint requests than it could handle — and, more importantly, that the special issue succeeded in motivating increased giving. 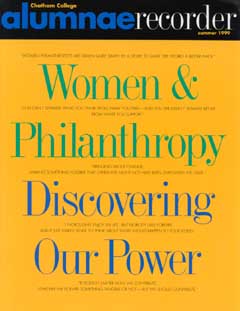